You are here: Home / Studies in Royalty / Royal School Books 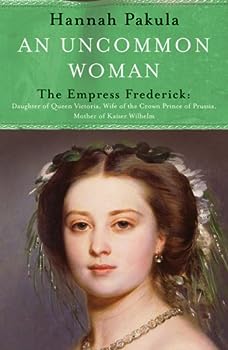 See my recommended reads at Amazon.com – only the best in royal books!

An Uncommon Woman – The Empress Frederick: Daughter of Queen Victoria, Wife of the Crown Prince of Prussia, Mother of Kaiser Wilhelm

You will feel great sympathy towards Vicky, the Empress Frederick, who was an unfortunate hostage to the intrigues of the German court. Sympathy will soon give way to awe at her courage and determination to do her best while having to perform the impossible: being all things to all people.

Vicky was seen as the catalyst for change in Germany. Her parents, Queen Victoria and Prince Albert did not like the autocratic, militaristic way in which Emperor Wilhelm I was running Prussia. Instead, they visualized a united German nation with a government much like that of England. Their plan was to sow seeds of liberalism and constitutional monarchy through their daughter and her marriage to Wilhelm’s son, Prince Frederick (Fritz). In preparation for the eventual match, Vicky was schooled in politics and German life by Prince Albert. Eventually, she and Fritz would be Emperor and Empress of Prussia, and could bring about German unity.

Little did Vicky know that upon arriving in Berlin, she was at a disadvantage from the start.

As the daughter of Queen Victoria, she was encouraged to retain her Englishness yet was expected to be a Prussian wife and princess. Her efforts to raise her eldest son Willy as Prince Albert had raised her backfired. Her tendency to over-criticize (a trait passed on from Victoria) turned the young Wilhelm away, and he grew up under his thoroughly Prussian grandfather Wilhelm. Otto von Bismarck had seen his own chance to manipulate the future emperor, and along with the groveling royal court, Willy was turned into a bombastic power fanatic.

Her relationship with Fritz was not seen as loving, but as an English princess scheming to Anglicize the House of Hohenzollern. Vicky was painted as “die Englanderin”, unfaithful to Germany and a demon on the shoulder of her husband, whom she ‘manipulated’.

Hopes that Fritz’s mother, Empress Augusta, would watch over Vicky were dashed. Augusta was known to be very liberal and free-thinking, unusual for royal women of the time. In her they thought they had an ally, but both the Queen and Vicky would be sorely disappointed. The once-progressive Augusta had seen her marriage to Emperor Wilhelm unravel over the years, and as a result she became a bitter, self-absorbed woman. She gave Vicky little support in her new role.

When they finally became Emperor and Empress, Vicky and Fritz had precious little time to implement any real changes. Fritz died from cancer of the larynx three months into his reign. Upon his passing, Vicky was left alone and devoid of support or influence. Your heart cries at the unfairness of brilliant minds wasted, while Willy becomes Kaiser Wilhelm II – egotistical, manipulative, and dangerous.

Thankfully, Vicky did not live to see the destruction of the Hohenzollern dynasty when Wilhelm II pulled Germany and England into a devastating world war. After fighting his own relations across Europe, he headed into exile, never to see the throne again. Albert’s catalyst did indeed create a change, but not in the way he had expected. Germany would be unified, but the reigning royal house would fall from power, never to recover.

– © MandysRoyalty.org
This review was originally seen on Amazon